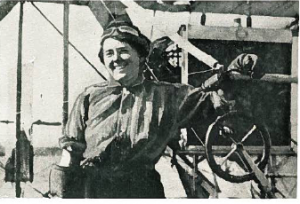 Born in 1880 on a farm in Indiana, Alys McKey began flying in 1912 in Los Angeles after answering an ad: “Wanted: young lady to learn to fly for exhibition purposes.” The ad was created by Fred Bennett and John Bryant of the Bennett Aero Company. McKey became the first woman to fly in a number of jurisdictions: Washington, Idaho, Oregon—and Canada.

Miss Alys McKey became the first woman pilot to fly an aeroplane in the Dominion of Canada at  Minoru Park, LuluIsland, B.C., on July 21, 1913. Not long after her unprecedented first flight in Canada, Alys McKey watched as her husband, John M. Bryant, one of the most outstanding pre-war flyers to give flying exhibitions in British Columbia, was killed during a fatal flying accident in Victoria on August 1, 1913. He was the only aviation fatality in Canada prior to the Great War.

In a letter of thanks for the commemoration of the 25th anniversary of the first flight made in Canada by a woman, as recorded on the website called earlyaviators.com, Alys McKey Bryant wrote, “during the 25 years that have slipped away, I have never lost my interest in aviation. Although WINGS have given me everything — and have taken from me — everything but my own life — my love for them has never diminished and now my one thought — one prayer — is that WINGS may be used — NOT for destruction, but for making more friendly and understanding relations between the nations of the earth.”

Here then is Frank Ellis writing about Alys McKey….

It was announced in the Vancouver papers that the well-known airman John M. (“Johnny“) Bryant, and the clever aviatrix Miss Alys McKey, were to give the exhibitions, and expert flying was promised. Few people knew at the time that Bryant and Miss McKey were husband and wife, as they had been married for only ten weeks, and Miss McKey preferred to continue flying under her own name, which she had already made famous by her daring flights in California, Oregon, and Washington.

The meet held on July 31 was notable, as two flying records went by the board that afternoon.

Bryant went up first in the Curtiss biplane and put on as fine a performance as the most critical observer could wish to see, making turns and glides with expert judgment. His landing was also perfectly timed.

Next followed an event of great interest in the history of Canadian flying—the first flight made in the Dominion of Canada by a woman pilot. Miss McKey proved herself both daring and resourceful during a flight which lasted sixteen minutes, in the course of which, at a height of some 700 feet, many clever aerial evolutions were made. Her landing was faultless and a fitting climax to the occasion.

On the third flight of the day, Bryant went up for an altitude record, and reached a height of 5,100 feet. This was the highest mark attained in the Northwest to that date, but it did not top the existing Canadian record, as Glen H. Martin had previously reached a height of some 7,000 feet at Montreal.

A brilliant finish to this flight was made when the airman shut off his motor at a height of 2,500 feet, dove steeply until he was within 100 feet of the ground, and then landed without again resorting to the use of his engine. It was clever flying for that early period. The next day, August 1, Bryant and Miss McKey, who were members of the Bennett Aero Company, and performed under the management of the same F. A. Bennett who had visited Nelson in 1912 with Walter Edwards, again gave the crowds at Minoru full value for their money.

At that time, of course, no altitude record had been established by a woman flyer in Canada. Miss McKey was holder of the American record for women—3,100 feet—which she had set up a short time previously at Seattle, and on that August afternoon she established the first record for women ever made officially in the Dominion. The height attained was 2,200 feet.

Additional flights made on August 2, under unfavourable weather conditions, concluded the flying at Vancouver.

Plans had already been made for the Bennett Aero Company to fly at Victoria during the water carnival the following week, and the machine was taken apart and shipped to the Island over the week-end.

Miss McKey was the first to fly the biplane at Victoria. She went up from the Willows on the morning of Tuesday, August 5, and flew off in the direction of Uplands. It was gusty up aloft, and she had difficulty keeping the machine on an even keel.

After flying towards Victoria, she swung round and headed back to the track in the teeth of the wind, the craft pitching constantly in the gusts. With expert handling she brought the machine down and landed, after a rough trip made under conditions which she described in an interview as being the worst she had ever been up in.

The next day (August 6), Bryant make flying history, for he not only flew the first seaplane ever flown on the waters of British Columbia, but also made the first flight over a large British Columbia city, winging his way for ten minutes 1,000 feet above the City of Victoria.

On the morning of the 6th he flew his wheel-equipped Curtiss from the Willows to Cadboro Bay, landing there on the beach. The wheels were removed, and a seaplane float waiting there in readiness was fitted to the machine, thus converting it from a land-plane to a water craft.

Shortly after 10.30 a.m. the work of conversion was completed and Bryant took off into a blustery wind. He made a landing at the mouth of the bay, near one of the small islands, evidently to test the machine’s landing ability. Once again in the air, he climbed steadily, heading directly for the Capital City, where 20,000 pairs of eyes had been anxiously scanning the sky for his arrival.

Soon the throng burst into cheering that swelled greater and greater, and from street to street, and, as if the aviator heard it he waved his hand. For nearly ten minutes Bryant flew at a height of nearly 1,000 feet. The aeroplane rocked like a cradle, and great gasps of relief would go up from the throng every time the frail aerial vessel righted itself.

After rocking and pitching in this fashion over Victoria, Bryant volplaned at a steep angle down to a landing just outside the inner harbour, and, “taxi-ing” in, he swung the craft into the wharf behind the Grand Trunk Pacific (now the Canadian National) slips, bringing it to a stop with the wing-tips almost touching the dock. Every point of vantage around the wharf was crowded with sightseers, and Bryant was given a great welcome. Johnny Bryant prior to his fatal accident in Victoria.

An unfortunate and sad story in our flying history now remains to be told, for on the afternoon of August 6 “Johnny” Bryant was killed. He was the only pre-war flying victim in Canada.

He took off from the water near the Department of Marine and Fisheries wharf about 5.50 p.m., and circled out over the harbour, coming back over the business section of Victoria. His machine had only been in the air five minutes and was some 800 feet above the city, in the vicinity of the City Hall, when the watchers below saw the plane dive steeply. This dive continued, becoming faster and steeper, until the craft was but 200 feet from the ground. The right wing was then seen to collapse.

Momentum carried the biplane over the Fire Department headquarters and the market buildings, and it crashed upon the roof of the Lee Dye building, at the corner of Cormorant Street and Theatre Alley. There was a wild rush of spectators from all sides towards Chinatown, and Cormorant Street and Fisgard Street were quickly packed with a mass of people. Detective Heather, Motor Constable Foster, and Constable McLellan had started on the run as soon as it was obvious that the machine was going to crash, and they arrived on the scene before the streets became impassable, and but a few seconds after a Mr. Ferrin, who had been standing in Cormorant Street, watching the flight. A ladder secured from the Fire Department headquarters was run up the side of the building, and Dr. George Hall, who had responded to the call for medical assistance, climbed to the roof.

There was little he could do, however, as “Johnny” had died almost instantly.

Mrs. Bryant (Miss Alys McKey) had been watching the flight from the Department of Marine building, and the accident plunged her into grief which was shared by the whole of Victoria.

“Johnny” Bryant was one of the cleverest airman of the time, and had done a great deal of flying prior to coming to British Columbia. His Aero Club of America licence was No. 208, and he had made his qualifying flights early in 1913.

Mrs. Alys McKey Bryant did not continue flying after her husband’s death. She now resides in Washington, D.C., and very kindly secured for the writer, from the Smithsonian Institution, copies of the records relating to flights in British Columbia which are preserved there.

This article has been excerpted from long article written by Frank H. Ellis and published in the British Columbia Historical Quarterly in October of 1939. Author and pioneering aviator Frank H. Ellis OC knows his subject. Born in England in 1896, he came to Canada with his family in 1912. Two years later, he constructed and flew a biplane. In 1919 he was the first Canadian to make a parachute jump from an airplane in Canada. In Flying Canucks, writer Peter Pigott notes of this jump that ‘the red welts left on Ellis’s body by the tightened linen straps ensured that silk would be used in future parachutes. Less than a month after his jump, parachutes would be used in an emergency situation.” It is possible that Ellis’s greatest contribution to aviation was his writing. In 1954 he published Canada’s Flying Heritage, the first major study of the history of aviation in Canada, followed by In Canadian Skies in 1959 and Atlantic Air Conquest 1976. His work “not only records the significant events of Canadian aviation but also pays tribute to the ‘forgotten flyers who flew by guess and by God or with calculating caution — for the sheer love of flying — in the early days.’” He was awarded the Medal of Service of the Order of Canada in 1972; two years later, the government of Manitoba named Ellis Bay in his honour. He died in North Van in 1979. For more information on Frank H. Ellis, see http://earlyaviators.com/ellis and Flying Canucks: Famous Canadian Aviators by Peter Pigott Toronto: Dundurn, 1996).

Subscriptions to British Columbia History are managed by the Magazine Association of BC. To subscribe for $20 per year, visit the journal at http://www.bchistory.ca/publications/journal/ or email subscriptions@magsbc.com or send a cheque to #201-318 Homer St., Vancouver, BC V6B 2V2.

An autographed photo of Alys McKey Bryant signed on the afternoon of her Vancouver flight. From earlyaviators.com

“Although WINGS have given me everything — and have taken from me — everything but my own life — my love for them has never diminished.” — Alys McKey Bryant, 1938.